Mike Tyson launched Evander Holyfield's ear shaped cannabis candy for the US market. It is precisely the same one that Iron Mike bit in the dramatic 1997 encounter. Mike Bites is the name of the new cannabis candy that Tyson has launched in Nebraska, California and Massachusetts. 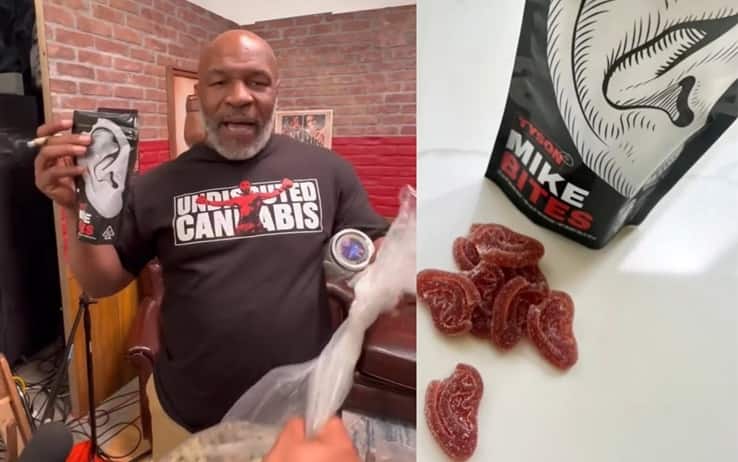 What happened during the match between Tyson and Holyfield in 1997

The previous match, played six months earlier, had sanctioned Holyfield's success for KOT in the eleventh round. Tyson had already been knocked out in the sixth round with a right uppercut.

The rematch immediately began in a very confused way, but with Holyfield still in command. At the end of the first round he also managed to score a heavy hook against Tyson, and he won the second half by points, unanimously for the three judges.

The turning point of the match happened in the second round: during a close contact, the two boxers collided with each other with the head; the blow caused a cut above the lid of Tyson's right eye. The boxer then turned to referee Mills Lane, accusing Holyfield of deliberately hitting him.

Lane judged the contact as involuntary instead, and let the fight continue until the end of the round, without a warning to Holyfield. Tyson started the third round without a mouthguard: Holyfield noticed this and invited the referee to make the opponent wear the protective device.

Tyson had a good round, managing to hit Holyfield on several occasions with excellent combinations of hits. About forty seconds from the end the match changed. Wwhile the two boxers were in close hand-to-hand contact, Tyson hugged his opponent and suddenly bit his right ear, managing to tear a piece that he subsequently spat in the ring.

Holyfield then began to bleed and jump in pain by having the referee intervene who called time out, even though he was unable to see Tyson's erratic action. Immediately afterwards Tyson pushed Holyfield behind him, causing him to crash into the ropes.

The match was suspended for a few minutes, and despite the referee's intention to disqualify Tyson, the intervention of the ringside doctor sanctioned the possibility for Holyfield to continue the match. The referee then chose to penalize Tyson by two points, and the match was resumed.

Upon returning to the ring, the scene was repeated almost identical: during another melee, Tyson bit Holyfield's ear. At that point, Referee Lane suspended the fight and disqualified Tyson. He further lost control: he tried to attack both the rival and the referee, and only the intervention of the police was able to prevent further reactions.

Upon returning to the locker room, Tyson himself was the object of tosses of coins, cards and bottles by the public. The verdict of the match officially sanctioned the victory of Holyfield, who reconfirmed himself as the world champion of the WBA maximums.

Floyd Mayweather is boxing this Saturday!
Martin Bakole won the fight against Tony Yoka
Mike Tyson reveals details of his Islamic lifestyle!
Floyd Mayweather's match cancelled
TODAY'S MOST POPULAR
NASCAR
Kyle Larson wants a new challenge: "I would love to race the .."
WWE commentator Jimmy Smith on Naomi and Sasha Banks incident
Chase Briscoe on All-Star Race: The draft will be a little more relevant here
Kurt Busch on divorce: I am heartbroken
Adam Silver: "We are working to bring Brittney Griner back to the US"
Ariane Andrew (Cameron) on Naomi: What is real, what’s fake?
Luka Doncic gives thoughts on defense Warriors played on him in Game 1
Relationships among sleep, athletic and match performance of soccer players
Floyd Mayweather is boxing this Saturday!
Stephen Curry, Klay Thompson on Andrew Wiggins locking up Luka Doncic on defense
THIS WEEK MOST POPULAR
WWE
WWE removes Charlotte Flair from TV shows indefinitely
Kyle Larson found the culprit after the race in Kansas!
Jerry Jones: Donald Trump said he felt sorry for guy who bought Cowboys
Doctor Strange actress sentenced to 8 years in prison
WWE joins two belts to SmackDown
Cody Rhodes: That's why I left WWE!
Chris Paul reveals his retirement plans
Amber Heard: HERE IS THE PHOTO WITH BREAKED LIP!
Virgil: "I have second stage cancer"
WWE: the OFFICIAL STATEMENT on Sasha Banks and Naomi