Matteo Berrettini is about to come back after the covid positivity at Wimbledon. In London, shortly before the debut match against Garin, the Italian number two had announced his retirement on social media due to the positivity at Covid.

With the presence of some symptoms, the Italian tennis player, considered one of the favorites to win, has voluntarily decided to do the swab, then tested positive. "I have not seen Wimbledon," this he declared later, showing all the regret for having missed the second Grand Slam of the season after the Roland Garros.

After the drama for Wimbledon, the last edition's Wimbledon finalist decided to stop on clay before going to American hard court for the Masters 1000 and for the US Open: he is the second seed of the Swiss Open, in Gstaad.

After shortly posting, Berrettini is back to pay homage to one of his longtime idols, LeBron James. The post on social media, however, has created quite a bit of controversy, for an emoticon that the blue has chosen.

The controversy and accusations of racism

To celebrate the greatness of the American NBA star, Berrettini has published a photo of him accompanied by two emoticons: that of the crown, referring to the King, and that of a gorilla.

The choice of the latter was not well interpreted, creating a controversy on social media: the main accusations are of racism. "25 years old and do you use the gorilla emoticon to talk about a black person?" writes a Twitter account.

Someone, however, tries to assess the player's intentions: "I don't think he intended to offend anyone, but he can be misinterpreted and I understand if people get angry with him." After the controversy arose, Berrettini decided to answer and delete the story on LeBorn: "I'm very sorry if my previous Instagram story offended someone.
I was informed that it can be easy to misinterpret it, so I deleted it.

Lebron is my greatest idol. Incredible model and inspiration." 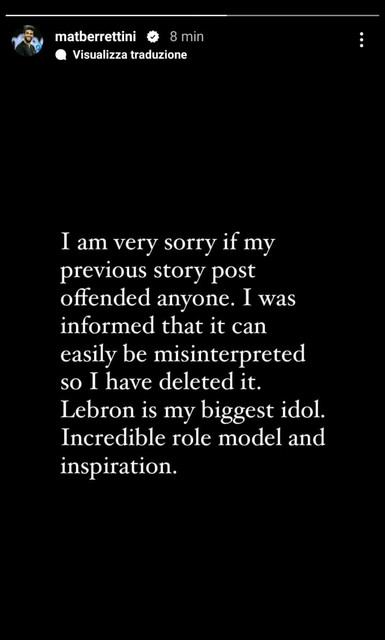